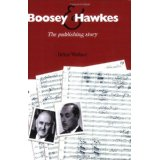 R443.48
A rare look behind the scenes of a publishing company as it works with composers to shape musical history.Rather than wage a price war, Leslie Boosey and Ralph Hawkes decided to merger their rival businesses in 1930, expanding from their London base to build a worldwide operation. Signing Bartók and Strauss and investing in talented young composers like Britten and Copland, the company fully came of age with the acquisation of Serge Koussevitzky's Russian catalogue with its masterpieces by Stravinsky, Rachmaninoff and Prokofieff.Close friendships developed, such as Ernst Roth's with Strauss and Stravinky in their final decades, whilst the relationship with Britten was rent asunder by rival sactions. A leadership vacuum following Ralph Hawkes's untimely death led to bardroom rifts, takover battles and aesthetic dilemmas. The 1980s saw a nev flowering, with the signing of composers ranging from Reich, Adams and Carter in America to Górecki and Andriessen in Europe.Distinguished jounalist and broadcaster Helen Wallace vividly charts the company's progress thorugh boom years and unexpected financial threats, and reveals how artistic foresight has been balanced with commercial reality to build one of the world's leading classical music publishers.Helen Wallace has worked as a music critic on The Times and as editor of The Strad, BBC Music Magazine, Southbank and About the House for the Royal Opera House. Her publications include Spirit of the Orchestra, about the Orchestra of the Age of the Enlightenment, and Classique UK. She is active as a broadcaster on BBC Radio 3 and 4 and is a Kodály teacher and cellist.

Prices and availability subject to change without notice.